Hey everyone. I just closed up my Game Boy Color Zero, and wanted to show it off real quick. I have lots of pics of the build, so I will add those in additional comments (attachment limits and all), along with all the details on how it was set up, in edits. It actually turned out not to be too difficult in the end, what with Glitch'd Gaming's button board and Pocket Adventure's "Assist" boards, and so I hope other people give it a try.

I would have had it done a little sooner, but I dropped my first screen and cracked it

- Luckily (!) it worked out, since, even though I had to wait a little while longer for the replacement, it actually was correct, where the first one had "touchscreen" functionality that added like a (precious...) mm or so, even though I did order it without that. Moral of the story - make sure you get that non-touch one!!

If you want to give this build a try, also check out my second attempt which has some 3D-printable brackets to make this much easier.

Highlights: parts list
All the partsShow
software
how to set it upShow
modifications
Things I had to changeShow
Screen notesShow
Although I actually discovered it on my own, it seems other people did as well around the same time - Since space is such a premium, the screen works best if you trim the case to fit. Luckily it's already a pretty good fit on the top and bottom, and the 2.4in screen fits nicely between the plastic wall where the power switch normally goes, and the LED indicator mounting spot. I trimmed the HDMI off the pi to fit better, because it was pushing against the screen at first, but that was when I had the touch-panel-installed one, and it might not have been necessary with the thinner, non-tft one.

I also ended up removing the connector on the SPI adapter board, and soldering its flat cable directly to the board, to save another mm or so.
Cuts madeShow
I ended up taking a bit more off the battery area, to more easily get the battery in and out of the shell, and I reinforced it a bit, in the rear of the battery compartment, just with some hot glue. I also ended up cutting a slit to that hole where the cartridge would be, so that I could work the wires into it that went to the power supply, mounted there.
Front shell cutouts and 1st battery cut. Mounted USB and volume buttons.:

X & Y Button WellsShow
The button board has built-in guide holes for drilling pilot holes, and then I used a step-up drill bit to get up to the proper size. I did try and work with the 8mm tactile mounting spots at first, but there just isn't enough room to get a button in there too. Maybe if someone comes up with a good 3D design to use on those it would work out.

I used Game Boy Pocket buttons, since they do not have the A/B printed into them, and I used a button well to match, and also the silicon from a GBP. It's important, if you do this, that you line up the slots on the wells with the silicon pad. they are pre-cut to fit in certain spots, so you won't get good action on the button if you don't. I also cut off the little hoop that would normally fit around a case peg, and that let it fit perfectly with the GBC silicon.

Power SwitchShow
I moved the power switch up to the top, where it is on a Game Boy (and where the Color had an IR remote spot) so that I could use its switch spot for SD Card access (basically the same spot as the contrast slot on a GBZ).

I trimmed the little flap off of the switch, that would normally hold the game cartridge in place on a GB, and filed a little bit around the case in that area, and it fit pretty well. There is not a lot of give/take though, so you can see into the case some when it is switched to one side if it's not mounted just right. I used a very small DPDT (2P2T) switch so I could also cut the battery off from the ADS - the motion isn't very wide, but it works well and keeps the button pretty much within the cutout for it.

I also removed some of the area around where the lanyard would normally go, to mount the battery monitor toggle button there.
Power Supply and CartridgeShow
I ended up just using the onboard LEDs from the PSU for charging/charged/power, so I drilled the small holes in the print to expose those.

I also ended up cutting off the lower half of the cart model (just under where the PSU sits in it) to give that bit of space over to the battery to use.
finishing touches and optimization
ComingShow
anyway, on to some pics... 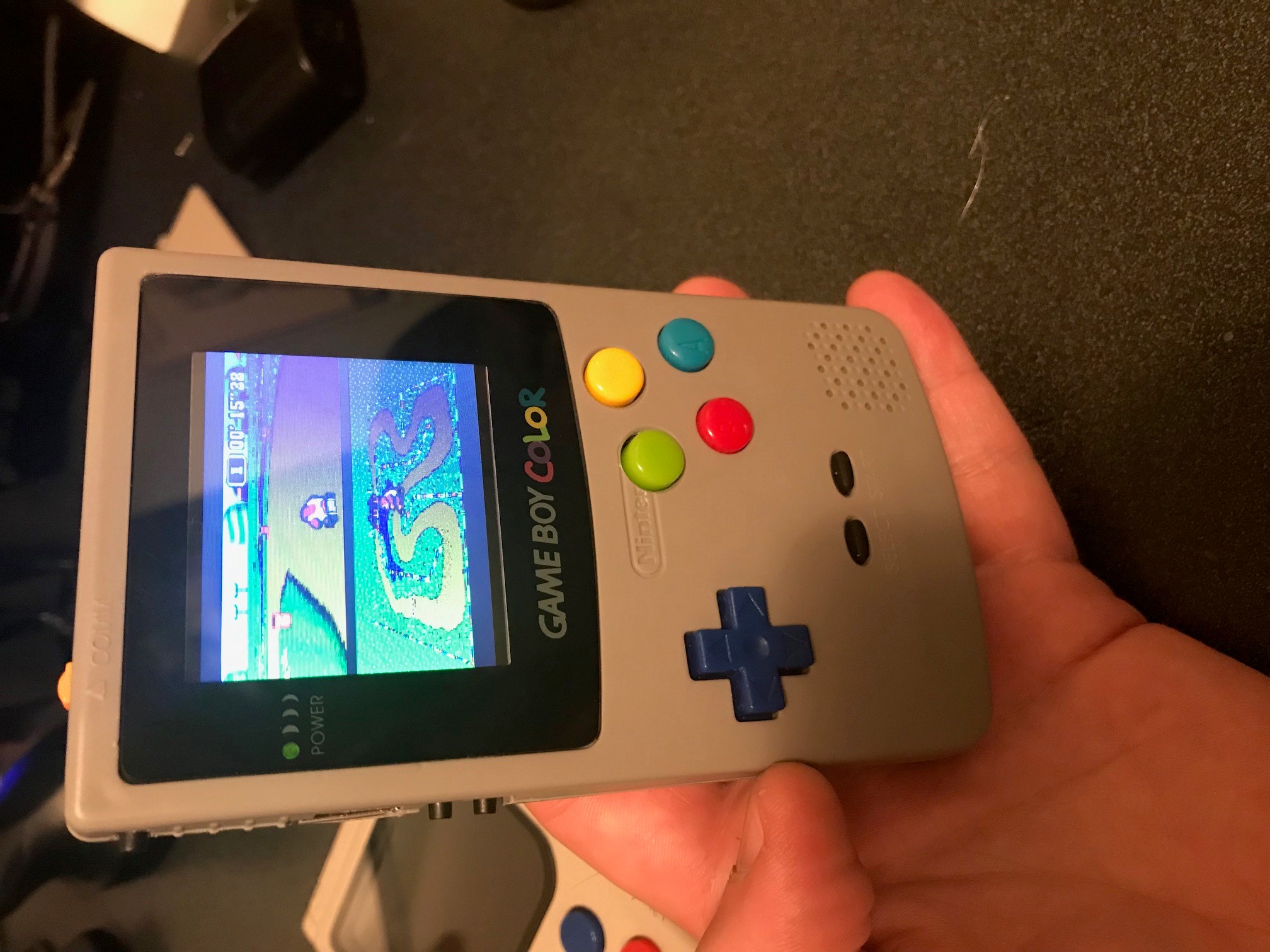 I did something somewhat unique for the shoulder buttons (although, who knows, someone else has probably done this before - someone has done everything, it seems - but it was an original thought for me anyway). it would be pretty easy to stick some tactiles in the sides there, but I've gotten spoiled on the silicon bounciness. So what I did was get some Game Boy Advance silicon, and some button pads, cut up the start/select and a/b pads, and glued them together and to a button board...

all the parts, cut upShow

(I just eye-balled the hole placement, and tried to line it up with those little walls from the battery compartment)
glued togetherShow

I will probably end up swapping the screen protector out at some point for a glass one, with just a stock whatever printed on it. Although I like the custom pi/zero aspect, the adhesive on the clear plastic lens is a little uneven, which makes it look like there are air bubbles in places on the printed vinyl sticker, so that's not ideal.

Here is the png I did for it though, if anyone else wants to use it or modify it (with and without "zero")
cuttin it upShow

Good job on the build! I like the powersupply, did not know about that one!

it is very nice - i like it quite a lot! it's got a small power strip too, so if you only have 3 things to power (like say, pi, audio amp, and usb in this one), you don't even need another strip for that. and when you mount it in a cartridge, pretty much all the pins for wiring poke out from where the case ends too, which is very convenient (it will fit in just about any "hollow" cart model, but the one on the site has indented marks where the onboard LEDs are, and a hole for the charge port).

the only downsides are that you can't just power from the charge port, since it doesn't provide enough power to everything that way without a battery to give it a boost, and that it's not as powerful as helder's psu, so even though it works great for zero builds, i don't think it would work well with more hungry builds like a/b+ or other types of pis.
Some of my builds...
BMO GBZ
Star Wars Millenium Falcon Challenge
Game Boy Color Zero
... and another Gameboy Color Zero with custom 3D-printed parts
"Ultimate" 3A+ Build
GlowBoy Zero

a few more shots of the build...

here's another inside shot, with the battery tucked in

from the back - battery accessShow

(lifted a couple pins (again) but they weren't in-use, so it still worked)

screen soldered and taped to the boardShow

Here's how I hooked up the GPIO. I also added the retrogame config to the original post instructions

I used everything on there, except the 5vs and one ground...