This is my first project, and like many people's first attempts at a new hobby, it's not going to be perfect. But while it may not be perfect, it has a lot of heart, and truly, isn't it the journey that matters more than the destination? I would like to think that for now, so I'm going to!

For this part I would like to just focus on getting things powered, then I'll start working out the USB ports and audio.

The components I'm using are:

-Raspberry Pi 3a+
-BW variant 11 3.5" composite screen,
-Banggood 5v converter,
-DIY power strip (I feel this may be the source of my problems?),
-Random power switch,
-LiPo 505060 battery (stashed in a cartridge in cartridge slot),
-Lots of hot glue,
-Lots of perf board.

My battery charging circuit is working and functional... I think. Before I attached the RPi to the power strip, a red status LED would show when charging, and a blue LED when it was powering something. Now, the blue light just flickers very quickly and faintly.

I assume I've done something wrong, but I don't know what. I'm hoping someone will be able to tell me!

Here are some progress photos: 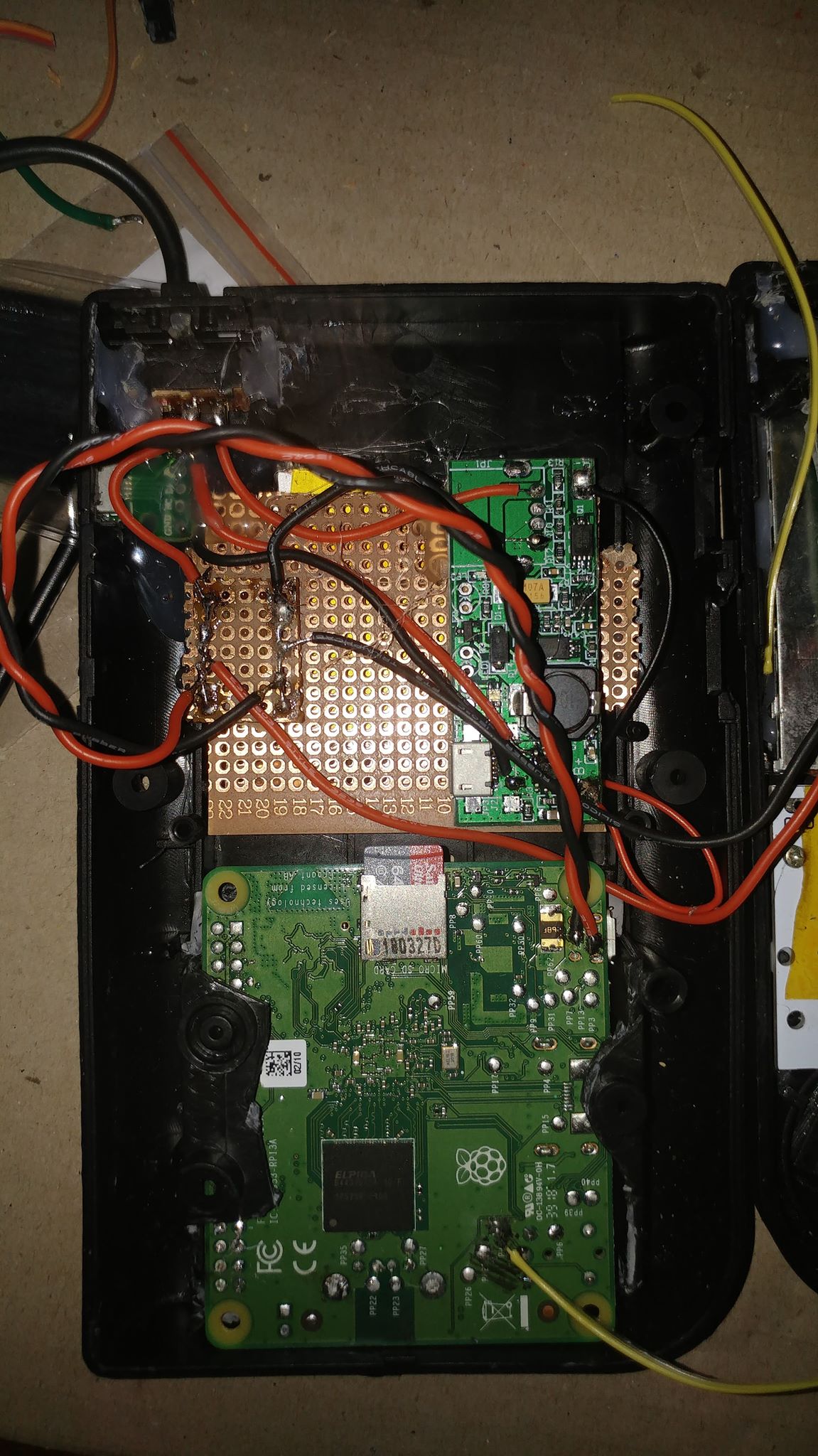 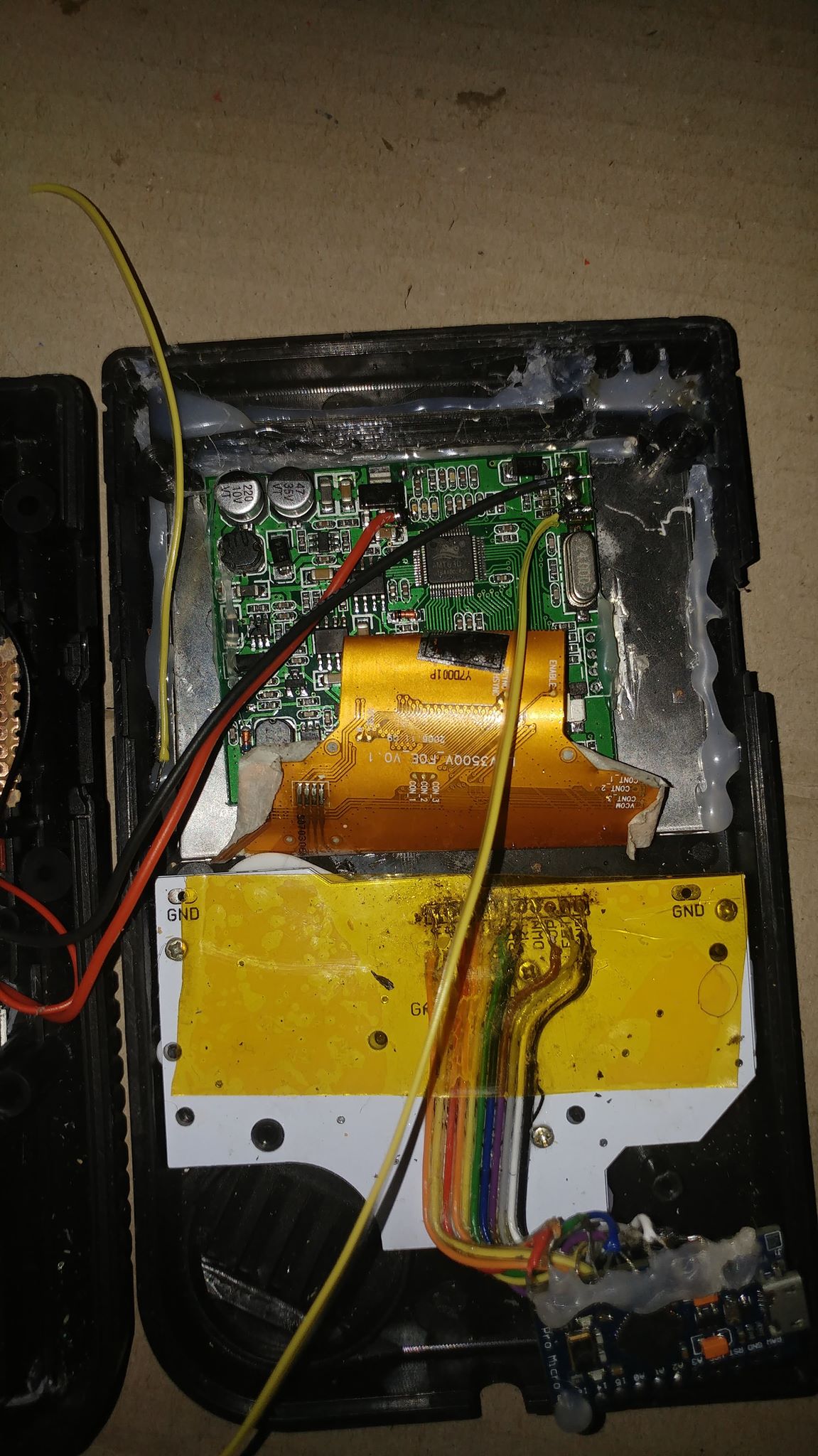 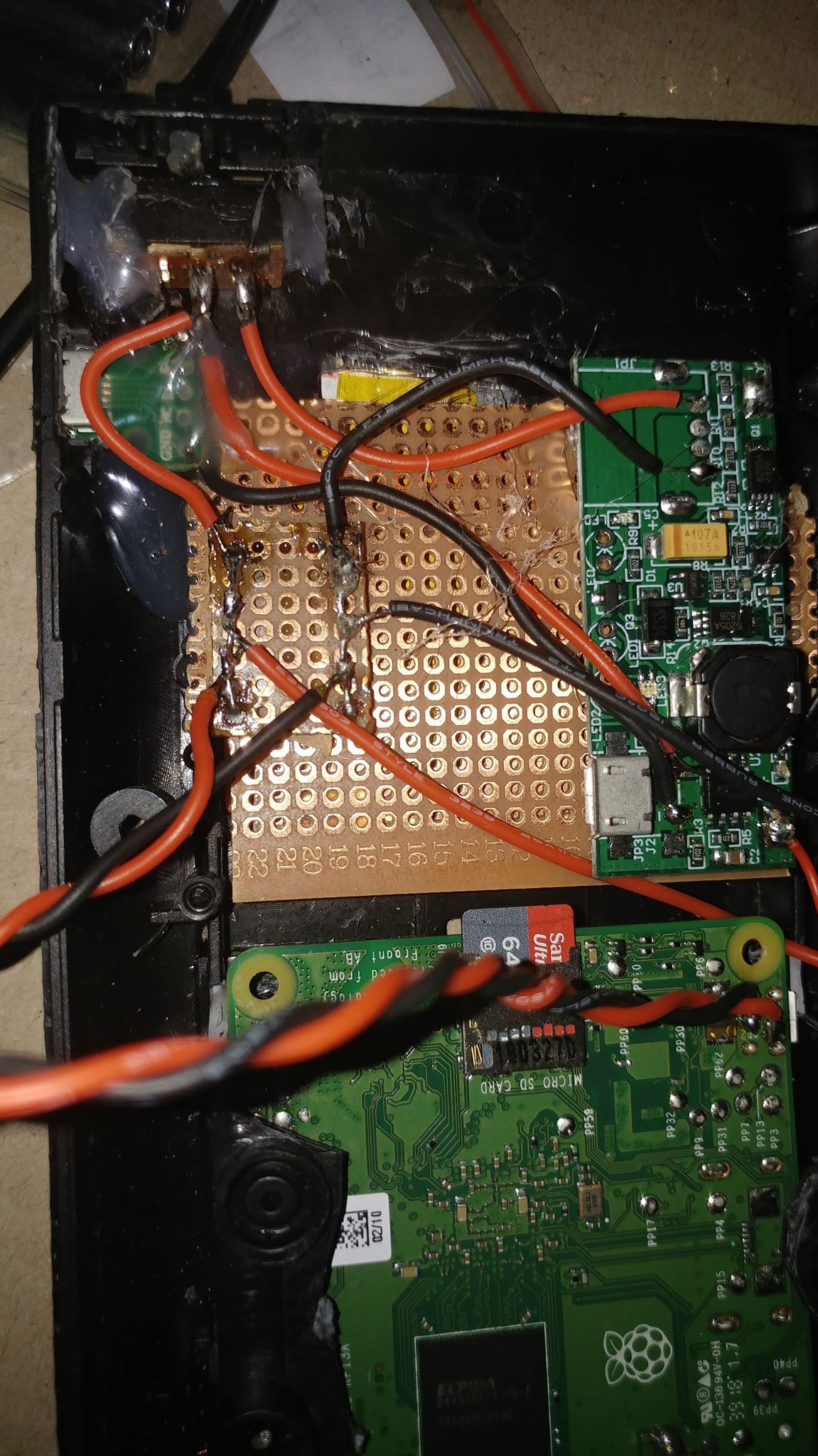 And here's a basic MS Paint diagram of my wiring right now (some components aren't to scale or have accurate placement but the wiring points are exactly as they are in my project): 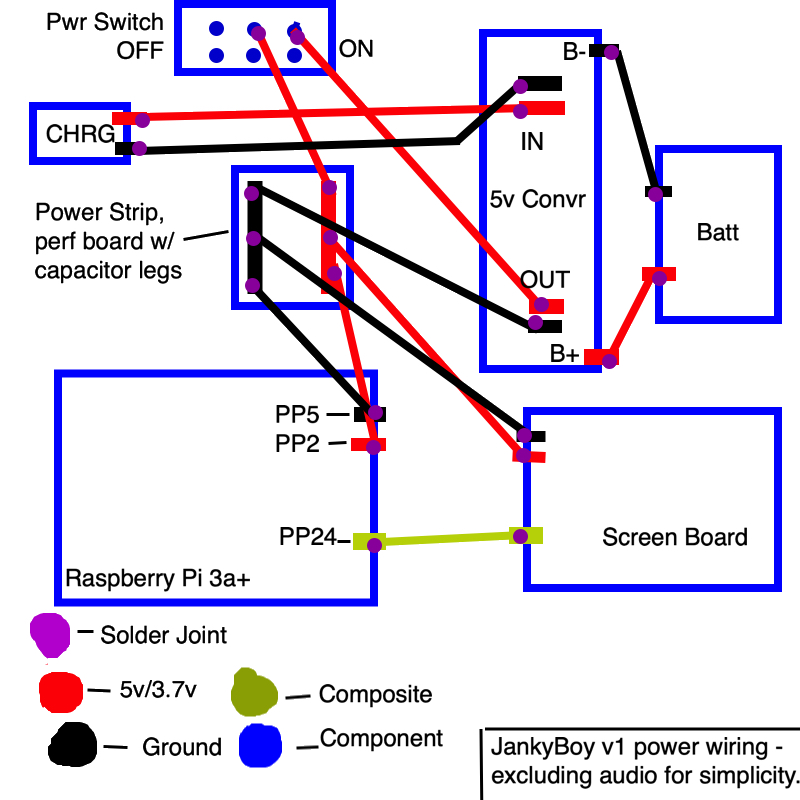 I hope someone out there has the forgiveness to not hate me for everything I've done so poorly here, and the grace to show me the way.

Thanks for the definition....
I'm sure most people know what Janky means

however...
I think/feel (IMHO), that your selling yourself short here....

your done good....
and to be really honest....
it doesn't really matter what it looks like inside (I say that with a pinch of salt)
as long as everything works

for me (and this is gonna ruffle a few feathers/shake a few snowflakes)....
this is way better than most Kite Circuit Sword builds out there (and this is not a knock at the CSO or anyone)

I see people high five themselves just by putting a pre-built AIO into a shell and picking some fancy buttons
thinking they've knocked it out of the park (again this is MHO, please NO one get upset)

but to build from scratch, shows alot more skill (however it turns out)


you've done good....
and I'm looking forward to the next project
(even thou its a CSO lite, ignore what I mentioned earlier

I thought of it like that fade in quote at the start of a movie, or a preface in a book


Hi, and welcome.
According to your wiring, it should work.
But that banggood pcb behavior is not normal.. the blue led should be on constantly.
So, a) maybe all system is consuming a lot of current and the power module cant handle it
b) maybe fried some component on the power module, and its behaving wirdly

hi. i just finished my 3a+ build, and I think your issue with the pi/screen not turning on is the current. i was trying the adafruit powerboost and when it did boot, it would give me the undercurrent warning. i swapped it for Helder's PSU and that works way better. the a+ wants like 2500mah and those powerboosts just can't push that, plus the screen and accessories.
Some of my builds...
BMO GBZ
Star Wars Millenium Falcon Challenge
Game Boy Color Zero
... and another Gameboy Color Zero with custom 3D-printed parts
"Ultimate" 3A+ Build
GlowBoy Zero

Also, i would put some kapton or electrical tape under the screen pcb, not to be directly in contact with the metalic parts ( cant see if you did, so sorry if you had done it)

i think this has happened to me on like 4 screens.... i'm having the hardest time getting screens to work right now. it's maddening. i bought a bunch of those bw screens on sale for like 10 bucks, but man, i can't figure out what i'm doing to them, and now i need to get some fresh ones again so i can at least have ones i know should work... ugh
Some of my builds...
BMO GBZ
Star Wars Millenium Falcon Challenge
Game Boy Color Zero
... and another Gameboy Color Zero with custom 3D-printed parts
"Ultimate" 3A+ Build
GlowBoy Zero

another thing to try... if you can, get a powerful adapter, like the official pi one that puts out 2.5A - plug that directly into the pi. you should be able to power everything like that, if it's the psu that is the issue.

i ended up somehow shorting the 3.3v on mine

and couldn't figure out why it stopped booting up, until i was going thru the "is your pi dead" checklist, and tested the 3.3 and got like nothing. apparently no coming back from that.
Some of my builds...
BMO GBZ
Star Wars Millenium Falcon Challenge
Game Boy Color Zero
... and another Gameboy Color Zero with custom 3D-printed parts
"Ultimate" 3A+ Build
GlowBoy Zero

I have some sneaky perf board and hot glue behind the screen pcb, nothing should be shorting there. I originally forgot to put anything behind there so that was fun trying to remove it without breaking anything

infinitLoop wrote: ↑
Sun Feb 03, 2019 3:06 pm
i swapped it for Helder's PSU and that works way better. the a+ wants like 2500mah and those powerboosts just can't push that, plus the screen and accessories.

Hmm... this may be my problem. The PSU did seem to work before I attached the Pi so this all makes sense.